Why isn't MY Power On? 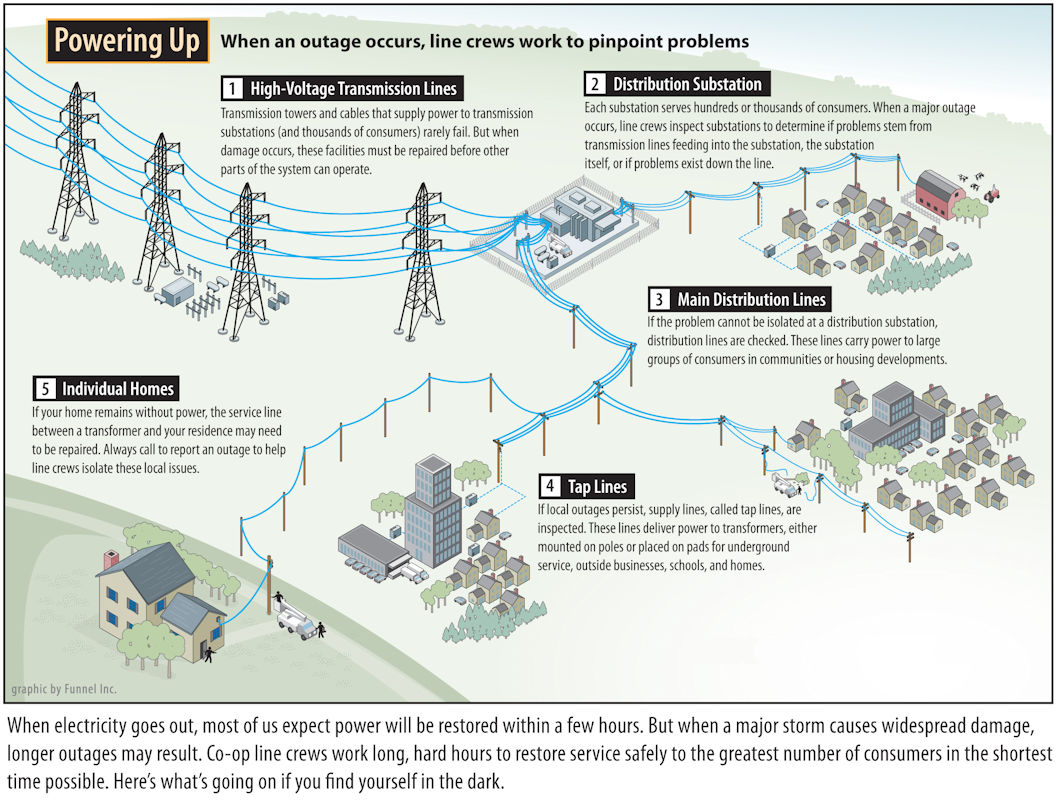 Here is an additional explanation of how the process works from Upper Cumberland Business Journal and our colleague Carl Haney of Cookeville Electric.

Electric power comes in from the Tennessee Valley Authority (TVA) on large high-voltage (161Kv) transmission lines. For perspective, one Kv is 1,000 volts, so 161 KV is 161,000 volts of power. The power goes to one of six substations where transformers break down the power from 161 Kv to 13 Kv. This can be done with one transformer, but each substation has two transformers to provide redundancy if one is damaged or becomes inoperable.

Imagine a substation is like your house. Power comes into the substation and is broken up to serve smaller areas, and each has a breaker, just like your house and its breaker box. Typically, there are six breakers in each substation, serving 500-2,000 customers each, and designed to protect the overall system when something happens to one part of it. If a tree falls on one distribution line, the breaker for that section will flip, and the other town sections will not be affected.

Power leaves the substations on 3-Phase distribution lines. In Cookeville, these are primary lines that serve those 500-2,000 customers across small portions of the city.  The lines each carry 13 Kv of power.

A transformer at each residence reduced the power from 13,000 volts down to 240 volts (two 120-volt lines) that feed the service on your house, providing its power.

Why does it take so much longer to repair a 3-Phase line than a line to your house?

If a tree falls on one of the 3-Phase lines, it is typically a larger pole and creates greater damage.

If a tree falls on a line to your house, it’s typically going to break that line to the pole, or it’s going to rip the service off the house so that it can cause damage to your house. We can go out when you get your service up and just put that one line up. When the 3-Phase lines fall, they can break poles; they can tear up transformers and break cross arms. There’s just more equipment there for the potential for them to break when they do get torn down, and there’s a large number of customers that it affects.

Why was this storm so much worse?

The extreme cold and the ice made this the perfect storm.

Ice to us in the electric industry is a lot worse than snow. It stays on the trees. It stays on the lines – obviously, the ice does. It’s a lot heavier than snow. A quarter-inch of ice can cause damage. A quarter-inch of snow, and we don’t even know it’s there. On top of that, you started adding freezing rain that keeps accumulating on those lines.  Cookeville was right on the edge of a line during the storm. The southeast side was more rain, and the northwest side of that line was freezing rain.

The majority of our damage was to the north and west of the city shared Haney. First, we had rain, and it began freezing. The rain and freezing rain continued to fall. So, when they would get one section clear and power restored, they would move to another section.

Almost immediately, ice would begin to accumulate on the just restored section, and it would go back out. There were sections of the city that had to get repaired multiple times throughout the storm.

The multiple waves of this storm have made the biggest impact in damage. The continual fall of freezing rain, and even the regular rain that fell Wednesday night, froze upon hitting the ice that was already hanging on power lines and tree limbs, stressing them to the point of breaking.

The Ice Had It
Seeing Is Believing Last Week's Storm Damage

The new and improved Member Portal is here! 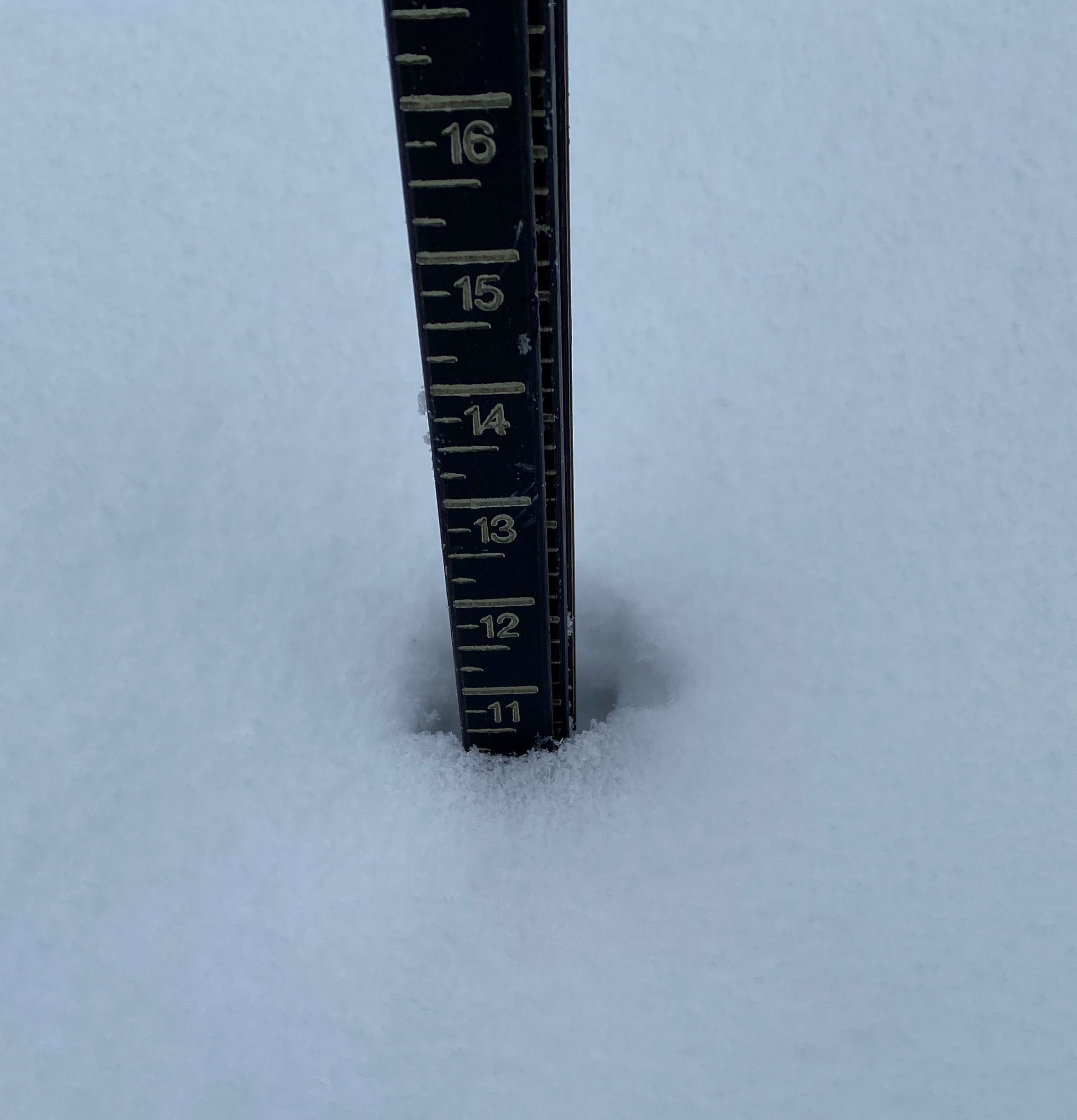 Deep snow envelopes the Upper Cumberland
UCEMC News
UCEMC News
As kids, we delighted in the sight. As adults, sometimes, not so much. The sparkling white snow fell relentlessly Thursday, and as the grown-ups searched the kitchen drawer for a ruler to star in the perfect social media pix, the kids ran outs...
Learn More...

UCEMC Cares Board 2022
UCEMC News
UCEMC News
The UCEMC Cares Board of Directors announces new officers and a new board member for 2022.  The new District 3 Director is Philip Marshall, who replaces retiring Director Mike Austin of Livingston.  Greta Hurst of District 2 is elected Chai...
Learn More... Paying Your Bill At UCEMC Just Got Easier!