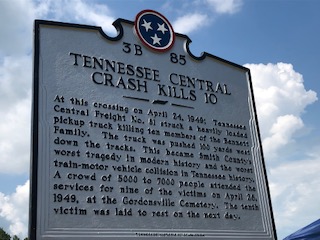 On the night of April 24, 1949, ten members of a Smith County family died when Jesse Bennett pulled his fully-loaded pick-up truck into the path of a fast-moving Tennessee Central freight train near the intersection of Lancaster Highway and Stewart’s Bend Lane. The family had just left a church revival.

The story made national headlines, and in the days following the accident, more than 7,000 people traveled to tiny Gordonsville, Tennessee to attend the mass funeral.

Today, this historical plaque marks the site and tells the tragic story for generations to come thanks to the efforts of the Smith County Leadership Opportunity Class of 2018 who chose the marker as their community service project.

The Leadership Class applied for and received a UCEMC Cares grant for a portion of the funding. “This commemorative plaque helps the entire community, and this is the kind of project that can benefit from a Cares grant,” says Cares board chair Terry Montgomery. “The pennies provided by UCEMC members who round-up their bill to the nearest dollar, add up to thousands of dollars in grants that make all the difference to organizations dedicated to historical and educational endeavors in the area.

Bennett family descendants and community leaders joined members of the Smith County Leadership Opportunity Class of 2018 for a dedication ceremony at the Gordonsville site on Sunday, July 7.

Tags:
UCEMC
Writing a UCEMC Cares Grant
Are your tax exemption certificates up to date?

Vigilance is Key to Co-existing with Nesting Osprey

The Simple Truth About Space Heaters

It’s down and it’s deadly

What is the best way to locate air leaks in a home?

The most rigorous way to locate duct leaks is with a blower door or similar analysis performed by a professional. This analysis measures the magnitude of your duct leakage and identifies its location. Some companies offer ductwork sealing services with a follow-up blower door check to ensure duct leakage has been reduced to acceptable levels.