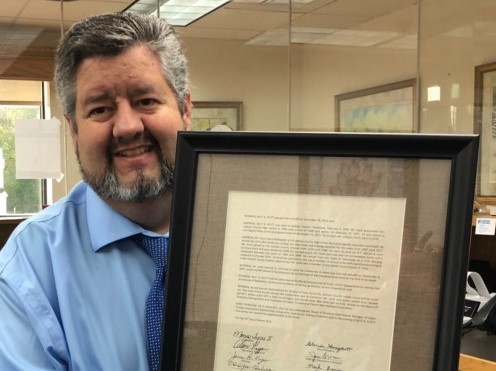 Billy and Patsy’s son, Gregory Scott, stopped by the UCEMC district office to receive the resolution in honor of his late father.

Billy R. Scott was elected to the UCEMC Board of Directors on September 8, 2007 and served as Chairman of the Insurance Committee until his death on December 16, 2012. Mr. Scott was born in Jackson County and was a lifelong fan of all Blue Devil sports, especially basketball.

He served as Jackson County Trustee from 1974 to 1986. He was known as a “people person” and was always ready to welcome new friends. He was married to Patsy Smith Scott, who passed away November 11, 2017.